Samsung has more than 32 million smart TV’s in households throughout the USA (even more globally). These smart TV’s not only allow for inputs from connected TV devices such as Roku, FireTV, Apple TV and more, but they also come built with access to Samsung TV app store. Samsung TV app store has been growing steadily over the past few years. Years ago Smart TV’s were considered a “Bust” and had very little viewership. However this has changed significantly since 2011.

In fact according to Samsung Ads research shows that since 2011 there has been a 200% growth in launching apps from the Samsung Smart TV. Tom Fochetta, VP of advertising sales at Samsung Ads, tells Video Insider. “Now we are seeing these OTT users launch these apps nearly every other day. It is becoming part of their video content mix; consumers are seamlessly going back and forth between smart TV, a gaming console, smartphone, tablets, and consuming this video through multiple touch-points.”

“They actually are making room in their media mix for more media content,” Fochetta says. “It is not a zero-sum game.”

All of this points to the fact that the definitions of TV is changing. Users are now seamlessly switching back and forth from an array of different sources. This means that broadcasters need to transform their media plan and launch their own TV apps on as many connected TV devices and Smart TV platforms as possible. Growth is in all corners but Smart TV’s have finally caught up with users – who now turning to their Smart TV native app store more and more often.

With Smart TV’s in the living room of millions of people both nationwide and globally the audience potential is growing. Its not just a fact of “If” millions more will be tuning in to the apps on smart TV’s its “how soon”. Previously audiences were hesitant to try TV apps or felt intimidated to use them, to access video content. However as Internet TV keeps making more headway more and more people are becoming aware and adapting. Even the older generations are are adapting new viewing habits as technology becomes more accessible and easier to use.

Smart TV’s (also called Hybrid TV’s) are growing across the board (not just Samsung) with all major manufactures. In fact from year to year there is significant increase in market penetration and with each manufacture promoting their own app store its only going to get better for Internet TV network owners. 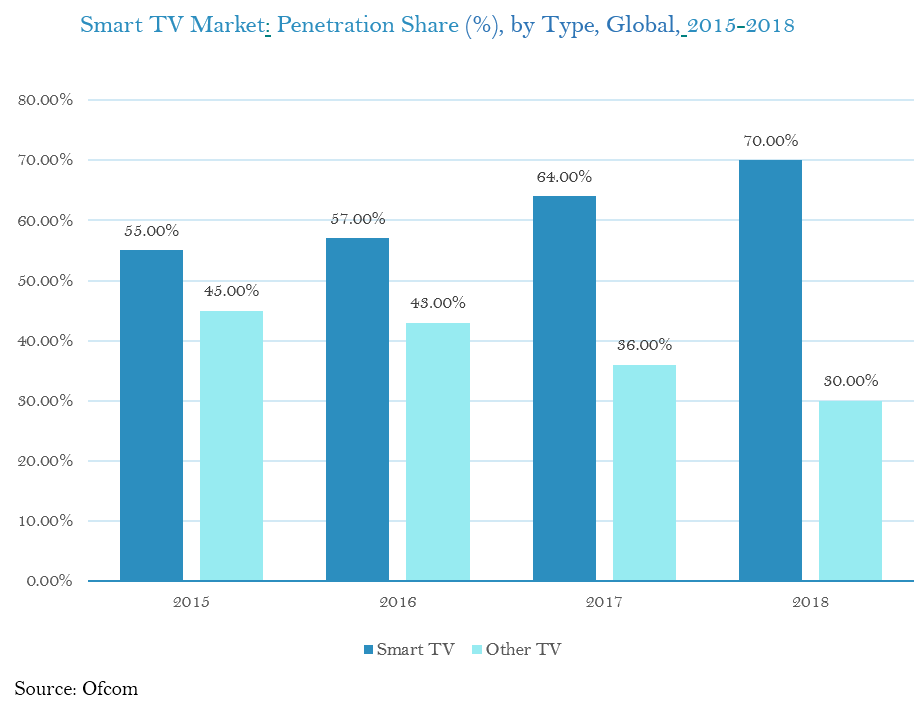 The global smart TV market is expected to register a growth rate of over 16.52% from now until 2023. With steady growth like this its no wonder your top broadcasters are placing their networks in the reach of smart TV owners.

What this all boils down to for online TV networks owners is more opportunity to reach more people exactly where they want to interact with them – in their living rooms. Many of our customers that have a TV app on Samsung see significant boost to their viewing audience and as the stats suggest this will only get better with time.

If you looking to start your own Internet TV network and have your own TV apps you should check out our Channel Manager by clicking here.